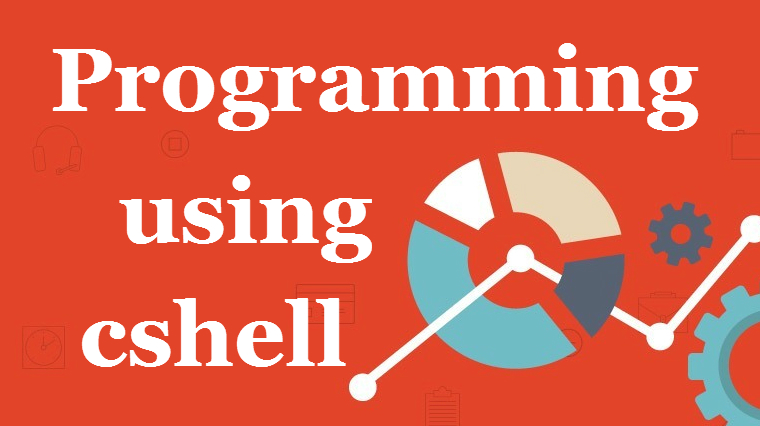 Most users run the C-shell ‘/bin/csh' as their login environment, or these days, prefer­ably the `tcsh' which is an improved version of csh. When a user logs in to a UNIX system the C-shell starts by reading some files which configure the environment by defining variables like path.

With some thought, the ‘.login’ file can be eliminated entirely, and we can put every-­thing into the .cshrc file. Here is a very simple example ‘.cshrc’ file.

# .cshrc - read in by every csh that starts.

We have already seen in the examples above how to define variables in C-shell. Let's formalize this. To define a local variable - that is, one which will not get passed on to programs and sub-shells running under the current shell, we write

These variables are then referred to by using the dollar '$' symbol. i.e. The value of the variable 'local' is ‘$local’.

Global variables, that is variables which all sub-shells inherit from the current shell are defined using `setenv'

Their values are also referred to using the '$' symbol. Notice that set uses an ‘=’ sign while `setenv' does not.Variables can be also created without a. value. The shell uses this method to switch on and off certain features, using variables like `noclobber and `noglob'. For instance

The operator '$?variable' is 'true' if variable exists and 'false' if it does not. It does not matter whether the variable holds any information.

The commands 'unset' and `unsetenv' can be used to undefine or delete variables when you don't want them anymore.

A useful facility in the C-shell is the ability to make arrays out of strings and other vari­ables. The round parentheses ' ( )' do this. For example, look at the following commands.

The special operator ‘$#’ returns the number of elements in an array. This gives us simple way of finding the end of the array. For example

Occasionally you might want to have a copy of what you see on your terminal sent to a file. 'tee' and 'script' do this. For instance,

sends a copy of the output of 'find' to the file `myfile'. 'tee' can split the output into as many files as you want:

You can also choose to record the output an entire shell session using the 'script' command.

The file mysession. is a text file which contains a transcript of the session.

The C-shell does not allow you to define subroutines or functions, but you can create a local shell, with its own private variables by enclosing commands in parentheses.

This program changes the working directory to /etc and then executes a subshell which inside the brackets changes directory to /user/bin and lists the files there.The output of this private shell are sent to a file ‘myfile’.At the end we print out the current working directory just to show that the ‘cd’ command in brackets had no effect on the main program.

No programming language would be complete without tests and loops. C-shell has two kinds of decision structure: the 'if ..then..else' and the 'switch' structure. These are closely related to their C counterparts. The syntax of these is

We shall consider some examples of these statements in a moment, but first it is worth listing some important tests which can be used in 'if' questions to find out information about files.

The simplest way to learn about these statements is to use them, so we shall now I. at some examples.

This script tries to copy a file from one location to another. If the user does not type exactly two arguments, the script quits with a message about the correct syntax. Otherwise it tests to see whether a plain file has the same name as the file the user wanted to copy to. If such a file exists, it asks the user if he/she wants to continue before proceeding to copy.

Loops in csh and csh foreach

The C-shell has three loop structures: 'repeat', 'while' and `foreach'. We have already seen some examples of the `foreach' loop.

The structure of these loops is as follows

The commands 'break' and `continue' can he used to break out of the looms at any time. Here are some examples.

This sends the message "Yo!" to mark's terminal twice.

This example repeats the command 'echo Shutdown time...' five times at 30 second intervals, before shutting down the system. Only the superuser can run this command! Note the strange construction with 'echo echo'. This is to force the repeat command to take two shell commands as an argument. (Try to explain why this works for yourself.)

Input from the user